Vuex is a state management pattern + library for Vue.js applications. It serves as a centralized store for all the components in an application, with rules ensuring that the state can only be mutated in a predictable fashion.

What is a "State Management Pattern"?

It is a self-contained app with the following parts:

This is an simple representation of the concept of "one-way data flow": 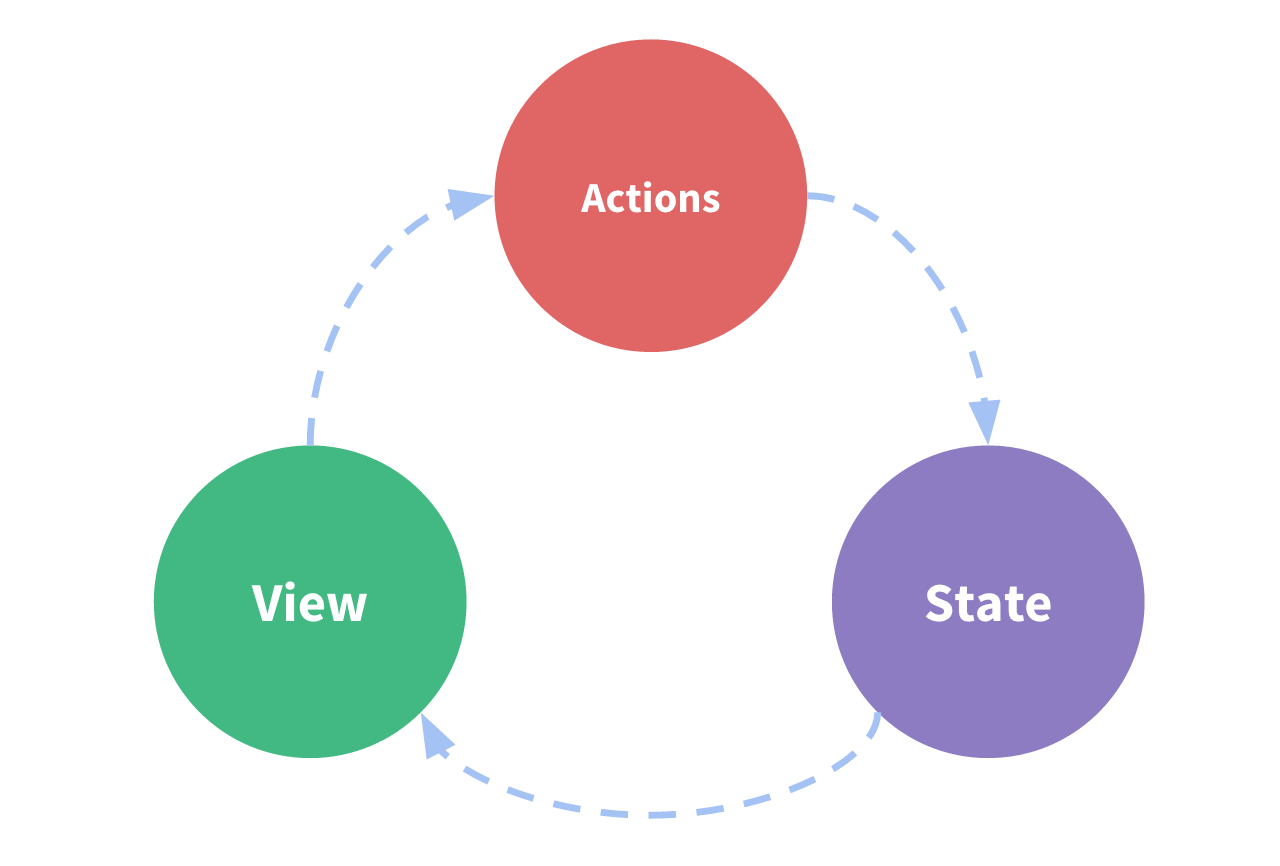 However, the simplicity quickly breaks down when we have multiple components that share a common state:

So to overcome this problem an approach is choosen

why don't we extract the shared state out of the components, and manage it in a global singleton? With this, our component tree becomes a big "view", and any component can access the state or trigger actions, no matter where they are in the tree!
This is the basic idea behind Vuex.

At the center of every Vuex application is the store. A "store" is basically a container that holds your application state. There are two things that make a Vuex store different from a plain global object:

After installing Vuex, let's create a store. It is pretty straightforward - just provide an initial state object, and some mutations:

Now, you can access the state object as store.state, and trigger a state change with the store.commit method:

Lets dig into some core concepts of Vuex

Vuex uses a single state tree - that is, this single object contains all your application level state and serves as the "single source of truth". This also means usually you will have only one store for each application.

Getting Vuex State into Vue Components

Since Vuex stores are reactive, the simplest way to "retrieve" state from it is simply returning some store state from within a computed property:

Whenever store.state.count changes, it will cause the computed property to re-evaluate, and trigger associated DOM updates.

The only way to actually change state in a Vuex store is by committing a mutation. Vuex mutations are very similar to events: each mutation has a string type and a handler. The handler function is where we perform actual state modifications, and it will receive the state as the first argument:

Actions are similar to mutations, the differences being that:

Actions are triggered with the store.dispatch method:

Vuex doesn't really restrict how you structure your code. Rather, it enforces a set of high-level principles:

As long as you follow these rules, it's up to you how to structure your project. If your store file gets too big, simply start splitting the actions, mutations and getters into separate files.

For any non-trivial app, we will likely need to leverage modules. Here's an example project structure:

Related Blogs
Introduction to Rapid HTML Development using Tailwind CSS
Tailwind is an easily customizable CSS framework for maintainable and scalable responsive web development. The building blocks of Tailwind is a large set of primitive utility classes which works like Lego to build

Felix A J
Bootstrap 5 alpha - The first UI Kit for the latest Twitter’s Bootstrap 5
What is Bootstrap? Bootstrap is the most popular free and open-source CSS framework directed at responsive, mobile-first front-end web development. It contains CSS and JavaScript-based design templates for typography, forms, buttons, navigation and

Sijo Varghese
Write Schema Without Schema Markup Generator
Schema markup generators won't write the entire code for you. They just help you to add the basic tags (4-5 features) for your schema. Let's see how we can write schema by implementing

Liji K J
Subscribe to newsletter
Need more tech news? Tune in to our weekly newsletter to get the latest updates